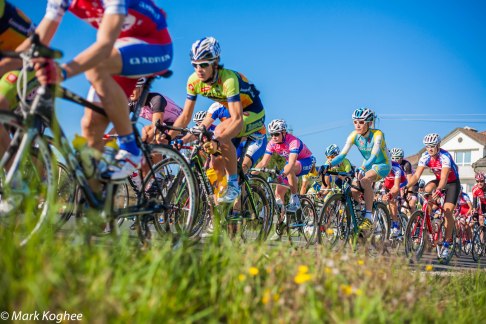 The Slovenian roadside ditches. This sunny Sunday was all about ditches for me. And that was quite unexpected. Today I rode my first bicycle race in Slovenia. Although cycling didn’t have any priority for me this season, I was going for a podium spot. The distance for sure wouldn’t be a problem. This last race of the season, which was my first one, was only 21 (!) kilometres short. That’s hardly worth leaving house for but because I never raced in Slovenia before and it was only ten kilometres from home I set off with high hopes.

There were not more than thirty other amateur racers at the start. Some were already changeless when they rode in to each other at the start and had to put their foot on the ground. I lasted a few kilometres longer. A few fast kilometres on a slightly descending road that swirled through a green oasis of sunbathing grass.

I rode in last place of the peloton. That way I could avoid the falls people predicted me. And a fall there was. Where the road was straight, visibility was good, the speed was high and the peloton consisted of no more than twenty men, somehow some guys managed to hit the deck. From left to right the road was blocked by broken bikes and parts and injured men. And I dove in to the roadside ditch with my bike. One meter and a half I drove down, a few meters I rode over the dried bottom of the ditch and when I tried to ride up again the narrow tyres of my racing bike didn’t proof themselves sufficient to tackle the grass and mud of the slope. I had to step off, walk up to the road and when I was back on the bike I saw the peloton disappearing in the distance. I finished my first Slovenian race in a chasing group, far behind where I hoped to be; an anti-climax.

After the race I took my camera out to take some pictures of the pro-race. I cycled along the route of the race again, looking for a spot that would give a nice perspective on the action. When taking pictures I always like to go for the frog perspective. That often means i have to lie down or kneel. But not this time. The place that gave me the best view on the race happened to be in … a ditch.