Rarely, very very rarely I must say, is it possible to hold the famous Eleven Cities Ice Skating Tour in the Netherlands (last editions 1986 and 1997). And thus, travel Dutch iceskaters, since 1989, to the frozen Weissensee in Austria to skate and to try to finish the Alternative Eleven Cities Tour which is held here. For the third year in a row I have visited the Dutch skating events on the Weissensee which now last for two weeks. Last year I finished the 200 kilometre tour myself. This year a lack of preparation forced me to lower my goal to 50 kilometres but I ended up skating 100 kilometres.

The morning of the 200 kilometre tour. When the first sunlight hits the top of the Alps there are already 1500 skaters on the ice of the Weissensee, skating on a 12,5 kilometre long round. In the last two weeks of January there were in total around 6000 Dutch people at the Weissensee which municipality has only 773 inhabitants. The profit of the 40.000 Dutch overnight stays in this period is more than four million euro. The lake, which futures in the James Bond movie The Living Daylights, is a goldmine. 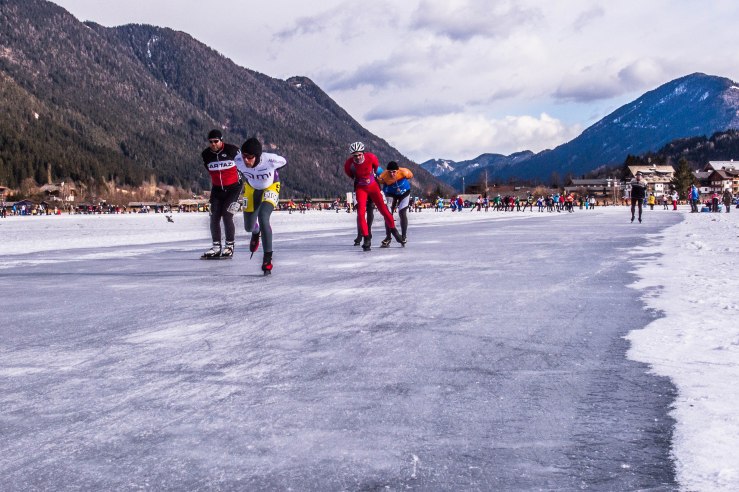 “With speed skating, it’s like doing one-legged squats over and over again, with that one leg absorbing more than 80 percent of your weight. It takes an enormous amount of strength, and you’re in such a weird position.”(Apolo Ohno, retired American short track speed skater with two gold, two silver and four bronze medals in the Winter Olympics) 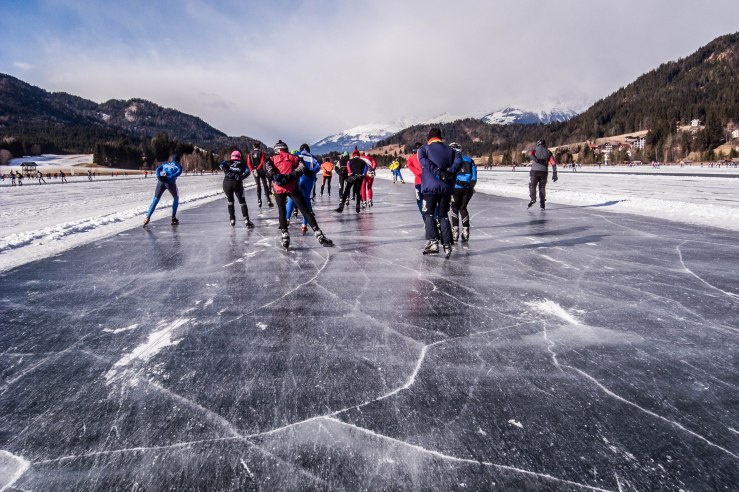 A piece of common knowlegde among avid skaters: “black ice is the best ice”. Extreme cold and windless periods create ‘black ice’ which is hard, wrinkless and without airbubbles. But it is actually the opposite of black. The ice is so clear that you can see through it to the bottom, making it appear black. Nothing makes skates glide better than black ice.

The evangelical church of Techendorf is a Neo-Gothic church built between 1900 and 1903 by “baumeister” Giovanni Colombo, not to be confused with the late Italian cardinal Giovanni Colombo.
The church serves as a picturesque background on many photos of the Weissensee. How many fallen skaters do you see in the picture? (click photo to enlarge)

The Feesttoeters (Partytrumpeters) had in Austria their first ‘gig’ abroad since their establishment in 2007. Skating events and party orchestras go hand in hand.

Gerard Braas (on the right) is my uncle. He rode his sixteenth 200 kilometre tour. His secret for a flawless 200 kilometre ride at the age of 65; eat gels, eat more gels, dress warm and wear protection.

While you skate you never see the face of other skaters. Skating events are like blind dates, only afterwards you can really see with whom you have been riding. 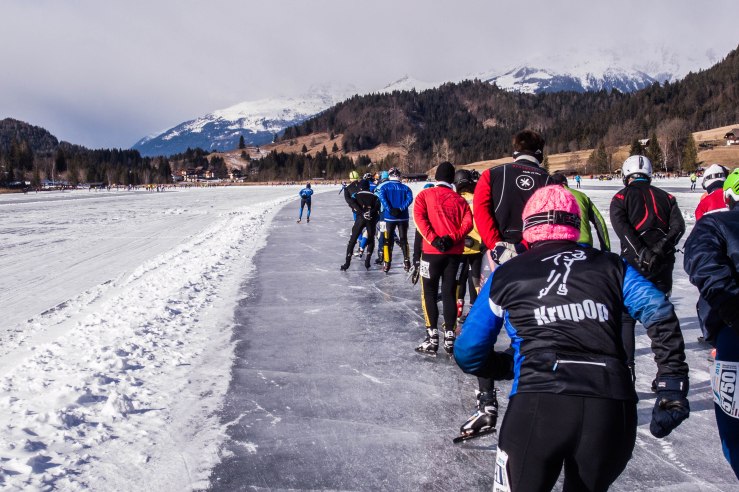 This is a demonstration of how many skaters you can fit in a tent. The information meeting the day before the 200 kilometre long tour.

Tents were used at least as far back as the early Iron Age. They are mentioned in the Bible; for example, in the Genesis 4:20 Jabal is described as ‘the first to live in tents and raise sheep and goats’. (Wikipedia)
Here tents are used as pit boxes for the skaters.

1 thought on “An addictive activity”